My friend (and fellow baroque musician) John McKean and I have recently been having fun trying to find aptly idiosyncratic translations for some of the prefaces to 17th-century German treatises on harpsichord-playing which he’s analysing for his PhD. The amount of vitriol which these keyboardists were prepared to expend on their rivals – and the mordant wit with which they plunge in their poisoned rhetorical  daggers – has to be seen to be believed.

However, as someone who has always been incredibly interested in the reception of Sparta in the modern world (viz. my own PhD thesis), I was literally left speechless for a few moments when John showed me the following extract from the preface to Wolfgang Caspar Printz’s Satyrischer Komponist, first published in 1677. 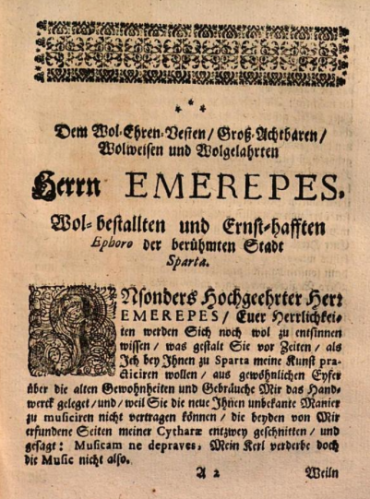 Printz, writing under the pseudonym “Phrynis of Mytilene”, addresses the dedication of his volume to one Herr Emerepes, the ‘well-cultivated and gravely-hated Ephor of the famed city of Sparta’. The entire two pages which follow constitute a sustained attack on the old-fashioned, fuddy-duddy mores of this pseudo-“Emerepes”, and conclude by dedicating the book to every man living – apart from ‘His Lordship’, Emerepes himself.

So, how to tease out this rich tangle of allusions?

It seems that Phrynis of Mytilene – along with other key figures such as Euripides – was the leading exponent of a new, modernising movement in art and music which began to gain ground in the years before Sparta’s crushing victory over Athens in the Peloponnesian War in 404 B.C. The musical world apparently became more professionalised, and innovations in form, expression, melody, rhythm and chromaticism became de rigueur.

Emerepes, in this connection, was notorious for having cut off two new strings which Phrynis had added to his lyre, with the laconically cutting comment (immortalised in Plutarch’s Spartan Apophthegms) “Do not abuse music!”

For Printz, the reigning style of composition and playing represents a Spartan-style tyranny which is trampling upon his newfound creative freedom. It’s hard to know whether Emerepes is envisaged as the avatar of a specific detractor, or merely represents all of Printz’s musical enemies, but in any event, he stands for the old, the philistine, the stick-in-the-mud critic, whose anger at Printz’s innovations may even end in apoplexy (my gloss for the ‘troublesome illness’ he mentions).

So, it’s for this reason that “Phrynis” turns his dedication around, declaring that he would rather dedicate his work to anyone in the world but “Emerepes”. Instead, he instructs him to sell the book on, or even throw it on the fire, rather than trying to read it through, if it should come into his hands. Printz has more confidence that the rest of humanity will have understanding for his new, experimental ideas about style and musical mores. Thus, in ‘true laconic fashion’, in as few words as possible, he dedicates his book to ‘Everyman’, whom he is ‘eager to serve’.

Is this a common trope in this kind of artistic literature, or an isolated, polemical example of Classical allusion taken to satirical (or satyrical) extremes? Since I’m far from an expert on this period, or this genre, I’m hoping that others may be able to fill in the blanks…